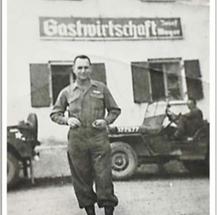 Outside a German Pub 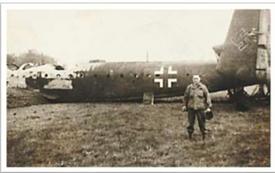 By David A. Robbins

A memorial brick was placed for Sergeant (E-5) Max Robbins at the Bluffton Memorial Veterans’ Park at Buckwalter Place in Bluffton, SC. It commemorates the memory and service of Max Robbins who served in the U.S. Army during World War II. He served with the 9th Infantry Division, Headquarters Company of the 39th Infantry Regiment in the European Theater of Operations. The brick was requested by Max’s son, David Robbins, who is also the current Post Commander of American Legion Post 205, Bluffton, SC.

Max received his infantry training at Ft. Bragg, North Carolina and later he received his Advanced Infantry Training (AIT) at Camp Livingston, Louisiana. He trained at Camp Edwards, Massachusetts to become a Radio Operator for Antiaircraft Operations. He became fluent in International Morse Code and proficient in message handling operations.

After Max completed his training, he then embarked for the European Theater at Ft. Meade, Maryland. He arrived in Scotland and went by train to London and then by ferry to Le Havre, France.

The time now was January, 1945 and the weather conditions were bitterly cold but, according to Max, there was not much snow and ice. When he linked up with his unit, 9th Infantry Division, 39th Infantry Regiment, he jumped off the truck and landed on top of a dead German soldier. Lying nearby he saw a dead American soldier with his chest ripped open. This was Max’s initiation to the horrors of war.

Max Robbins was in Germany for three days when he crossed the Rumagen Bridge. The bridge was blown-up that night by the Germans and the troops were cut off. Max pulled guard duty that night with Headquarters and Headquarters Company. His unit had suffered 50% casualties. However, General George Patton and his armored column came in from the south and rescued the Americans. Max’s unit pushed east and he, with his unit, were credited with serving in battles and campaigns of the Rhineland and Central Europe.

At the conclusion of the war in April, 1945, Max’s unit participated in liberating the Dessau (Germany) Concentration Camp. He saw the shocking inhumanity and the depth of the slaughter that had taken place. 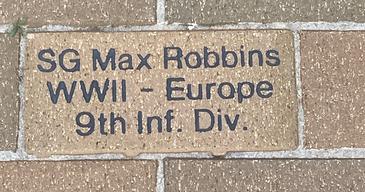 Standing in front of a downed German Plane.